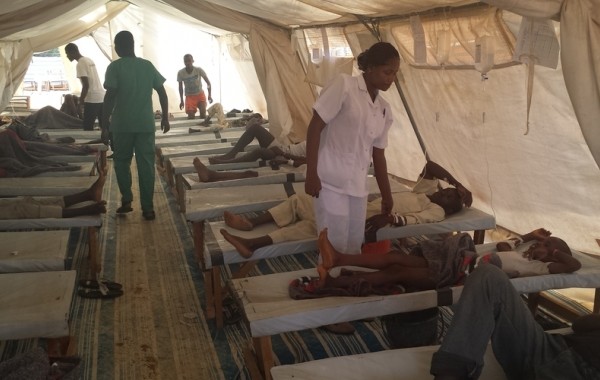 The insurgency ravaging the North east has badly affected development work in the region as aid workers have been forced to abandon their humanitarian activities and flee insecurity and targeted attacks by Boko Haram fighters.

Ironically, Borno State, officially tagged “State of Peace” is now, perhaps, the most hit by the insurgency as well as the flight of aide workers as it was home to several high profile domestic and international development personnel and aide workers.

For example, the Borno State government, as part of its commitment to ensuring that the people attain high standards in health had signed an MoU with the United Nations Population Fund, UNFPA, in the 6th Country Programme, under which the international body provides support to 10 designated focal project LGAs partly to increase the low political commitment and community support for population, rural healthand gender issues and reduce the wide gender gap.

Also, Borno State served as a regional hub (with the University of Maiduguri as the incubator) for many conferences and training workshops even as many pilot development projects were sited there.

Such projects had to be abandoned half way – and the story is same in neighboring Yobe and Adamawa states.

In February 2013, in Borno State, two vaccinators were killed, both murders carried out by Boko Haram. In the same month, three North Korean doctors and health workers were murdered in Yobe State.

Two years ago, Médecins Sans Frontières/Doctors Without Borders (MSF) moved into Baga, a town nearly 200 kilometres Northeast of Maiduguri, the capital of Borno State, where thousands of homes were burnt and hundreds of people were killed. The organization then reported that it was treating 80 patients a day; half of them children.

But after five gunmen hijacked one of their vehicles along with medical supplies and other equipment, MSF abandoned the project because it was too dangerous.

The surge in terrorist attacks by Boko Haram insurgents worsened the humanitarian crisis in the region, which meant that more aid workers were needed to help mitigate the effect of the insurgency.

In 2014 alone, more than 500,000 persons are estimated to have been displaced from their homes due to terrorist attacks.

In the first half of last year, civilian deaths are estimated at over 2,000. Since the insurgency started in 2009, more that 5,000 persons are believed to have been killed.

Sadly, the insurgency that bred the catastrophic humanitarian problems has also fuelled the insecurity that continues to pose a complex challenge to aid workers.

When our reportervisited Borno State late last year, the situation was really bad.

A medical doctor at the University of Maiduguri Teaching Hospital and one of those that escaped an attack last year on medical personnel said that aid workers were specifically targeted for attacks by the insurgents.

“We were clearly identified and attacked; we were beside the International Red Cross. It was unfortunate. After that the doctors left Borno,” he said.

With increasing insecurity, the mission of international aid agencies to deliver needed assistance, including food and medical supplies to affected communities, has become increasingly perilous; particularly as aid workers have been targets of attacks.

Thus, many of these agencies have scaled down their operations while also developing new strategies to meet their humanitarian goals.

In Borno State, a non-governmental organization, NGO, that does not want to be named said one of the strategies it had come up with is to rely largely on its local partners.

A senior manager in the NGO who came into Maiduguri to supervise its activities confessed that “security is a constant threat for everyone – including aid workers” and that its strategies are constantly being influenced by the security situation on ground.

“At present, all our staff are working from home after we lost two staff members”, she said.

She explained further that insecurity continues to cause delays and disruption in the activities of aid agencies so much so that thousands of affected people who need help cannot be reached quickly enough.

Significantly, she said that many international organizations and development partners which had been well established in the region and had been involved in key sectors of the economy have abandoned their core activities and have been forced to concentrate for now on providing emergency services such as food and healthcare.

“And despite its best efforts, several would – be beneficiaries die while trying to access healthcare. The situation has forced the organization to suspend all its long-term economic development programs — like helping locals start their own businesses — and focus exclusively on humanitarian assistance especially in provision of medical and health supplies, until the situation improves, so as not to put its personnel in more danger,” she stated

In a camp for displaced persons in Biu, Borno State, an aide worker, Bashir Mohammed, who just came in from Maiduguri told our reporter that even working from home is not easy..

“Electricity is cut off for about 16 hours a day, leaving aid workers struggling even more than usual to do their job.”

“Having your computer turned on all the time is like a luxury now,” he pointed out, adding that they try to keep charged phones solely for work purposes.

Kamal Omar, another aid worker, agrees that it is tough and frustrating delivering assistance to people when they need it.

“It is hostile here,” he said ruefully, adding, “In some of the villages attacked all they need is, for instance, is access to clean water to take the drugs that we just are barely able to get across to them. Before the Boko Haram violence escalated so badly, most supplies were from Abuja, Nigeria’s capital, but now the aide workers rely on available items in the local markets. Driving supplies from Abuja is now a senseless, perilous enterprise.

“In case of a supply shortage, we simply wait, “Aisha Hassan, who works for an international aid agency,  informed our reporter, adding, “most times there are no contingency plans to procure supplies from anywhere.”

Hassan points out that the aid workers also have the extra burden of dealing with the military which is sometimes hostile to people who work in humanitarian/aide community.

Soldiers, she noted, treat aid workers with suspicion and have actually accused some of them of being insurgents or sympathizers.

“We have the military to contend with in getting the supplies into Maiduguri and on a few occasions we have had close brushes as security say they have tips that we are helping Boko Haram,” she said.

As it gets more difficult for aid workers to deliver assistance where it is needed, victims of insurgency are left to suffer the double jeopardy of being attacked by terrorists and then being denied help.

Recently, according to the Borno State Commissioner for Health, Salma Anas-Kolo, 27 persons lost their lives to cholera at an IDP camps in Biu.

“There is pressure and it is difficult getting volunteers or aide workers to come this way but we managed somehow to take care of over a 1,000 persons at a particular camp.”

On one occasion, she explained, about 500 persons in a camp were suffering from diarrhea and the state government had difficulty bringing in medical supplies and had to “seek the assistance of development partners, including UNICEF and Red Cross, to complement us.”

In spite of these difficulties, however, international organizations and their workers continue to courageously weather the storm of insecurity to get to victims of insurgency in the Northeast.

In fact, Nigeria continues to be one of the biggest recipients of development aid with many international agencies committing more funds to efforts to help victims of insurgency in 2015.

In 2014, the European Commission Humanitarian Office, ECHO, committed €12.5 million to relief operations in Nigeria, with €5 million going to efforts at helping displaced persons.

ECHO has budgeted an initial €9 million for relief work in Nigeria with an increase foreseen before the end of the year.

This is the final article in our series, “The Cost of Boko Haram War”. The project was supported by Ford Foundation and the International Centre for Investigative reporting.