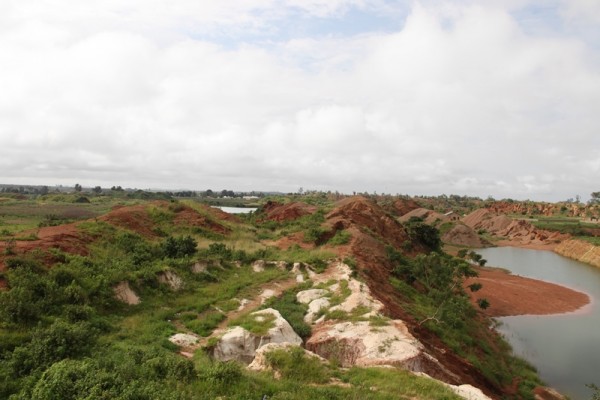 Until it became synonymous with violent ethno-sectarian clashes, Jos, capital of Plateau State, was more widely known for its sultry weather and tin mining. Tin mining started in the “Tin City” way back in1902 and by the mid-1940s the British government formally entered into exploration and mining in the region, making it the number one foreign export from Nigeria.

But the discovery of oil in the mid-1950s resulted in a shift in emphasis from tin mining. With the shift, Jos was caught cold and left blighted with challenge of degradation and devastation to the soil and the environment.

Tin exploration and mining left a grotesque legacy of over 4,000 abandoned mining ponds, which have continued to pose a serious threat to the environment and the inhabitants.

Quite a lot of damage was done to the land, particularly around Jos.

Dozens of people have drowned in the deep unmanned ponds and there are speculations that the ponds have radioactive elements, which represent further danger to the people in the area.

A recent visit to mining settlements of Gidan Adudu, Rafin Zeti, Zawan, Gidan Mai Gandu, and Gyel District of Jos South and Barkin Ladi local government areas provided a bold hint of the extent of damage on the land.

It showed almost half of the land mass-littered with dumps from abandoned mining activities.  The continuous neglect of the abandoned mines present a threat not only to the illegal miners, but to the families of laid off miners still living in the cramped mining quarters erected by mining companies as early as the 1930s.

The abandoned mines are also death traps, as children and adults occasionally drown and the ever increasing population of people living around the ponds means more and more people are exposed to dangerous radioactive particles

The picture in the affected areas is grim, as years of mining and exploration activities have created numerous erosion sites which have grown into huge gullies.

Farmlands discovered to have tin deposits or are situated close to tin deposits are seized from the indigenes without adequate compensation to service the interest of the mining activities and, most times, the owners of the lands are helpless and have no idea the amount of wealth that has been plundered from their land.

The ecological damage to the land in Jos and its environs is massive and started as early as the 1950s, when miners started cutting down trees for mining and fuel purposes, as well as digging the earth, causing various levels of  erosion.

The Plateau State Commissioner for Environment, Sylvanus Dangtoe, expressed worry at the state of the abandoned mining pits

“When the land was excavated, they dug quite deep. Only God knows the depth of some of the pits and that has exposed some of the chemicals that were buried deep in the ground. Some of these chemicals are quite dangerous, the radioactive elements can even cause cancer,” he said. Studies taken at different times over the years indicate that tin ore, one of the several minerals found around Barkin Ladi Local Government Area, contains toxic crystalline silica, which has been associated with lung cancer and other respiratory diseases. For decades, mine workers have been working with little or no protection against this toxic substance.

In 2012, the then Minister of Health, Professor Onyebuchi Chukwu, told his audience at the 55th Annual National Council of Health meeting that years of tin mining in Plateau State have exposed residents to danger and the increase in cancer cases is linked to radioactive waste in the area.

At Sacred Heart Community Health Clinic, Gidan Adudu, one of the few facilities catering for thousands in the entire district, Musa Atang, a medical doctor, confirmed the minister’s assertion about increasing incidence of cancer.

‘There is indeed increase in mortality from various lung-related diseases, which has given us reasons to believe that there is a relationship between long-term inhalation of silicon dust found in tin and lung cancer. Other respiratory diseases like pneumonia are evident here,” he said.

He stated further that because the mining companies had no medical data of workers before closing down, it is difficult to give an exact figure of the number of workers affected in his jurisdiction because they always referred patients with severe cases to specialist hospitals in Jos.

But, certainly, he said, the rate of lung-related diseases is higher in Plateau North than the south where mining activities are less prevalent.

Mallam Abdullahi, a retired miner who hails from Bauchi but worked at at Ganan Daji, a mining village in Barkin Ladi local government area, said the miners are aware of the dangers but have no choice because it is the only source of livelihood they know.

“The white people don’t come close to the toxic materials, but they allow us to mix it with our bare hands. We knew it was dangerous but we needed the money,” he said. Dangtoe observed that retired mine workers who still live around the mining ponds have no access to basic amenities and drink water from the ponds, something clearly injurious to their health.

“On several occasions we have warned people living close to the area and have drawn the attention of the Federal Government, as a matter of urgency, to look at these areas. If the person in the Niger Delta is crying that his land has been degraded by oil exploration, the Plateau man has every right to cry out for justice,” Dangtoe argued.

Continuing, he said: “Tin was the backbone of the economy of this country during that era, but mining has done a lot of harm. It has caused devastation and degradation. The federal government should really look into how we can solve some of the problems that is caused by mining activities.”

Efforts towards addressing this challenge through the Ecological Fund given to the states by the federal government as well as the move towards the call by civil society for the establishment of the Land Reclamation and Ecological Development Board in Plateau State have yielded precious little or nothing in tackling mining-induced devastation in the state.

A total of N1.6 billion Ecological Fund meant for the state disappeared during Joshua Dariye’s tenure as governor. He told investigators of the Economic and Financial Crimes Commission, EFCC, that the money was spent on the 2003 campaign of President Olusegun Obasanjo.

A staff of the budget committee at the Plateau State Ministry of Finance told our reporter that since Dariye’s scandal, the federal government has stopped disbursing ecological funds to the state and made the copies of the state’s annual budgets available since the inception of this present administration to prove his point.

Many residents of Plateau State think that the tin deposit on their land has been more of a curse than a blessing. Jos is famously known as Tin City because the city and the surrounding communities sit atop huge deposits of tin ore. However, the people complain that it has hardly translated into wealth, development or opportunities for residents.

The Plateau State Commissioner for Solid Minerals, Sani Agwom Zandi, is one of those who believe that the people have not derived much benefit from tin exploration.

“If you look at the environmental problems we have, you will know that the companies did a lot of damage to the land and left without any reclamation plan,” he lamented.

Human rights organizations such as the League for Human Rights have shown interest in the affected area through advocacy between 2000 and 2006, but were forced to discontinue due to lack of funding for their work in this area.

Added to this is the seeming tepid interest of the government in the mining sector. This has also weakened the resolve and resilience of mine workers in the struggle for their rights.

The mining companies are gone, leaving over 4,000 ponds are still abandoned and dangerous. The miners are still living close to exposed radioactive particles, while there are  no records to track and regulate the number of people whose health have been affected mining on the Plateau. And with the accusations of embezzlement of ecological funds buzzing back and forth, the hope of the government making a case for the miners to be compensated by the multinational companies is mirage. At least, for now.