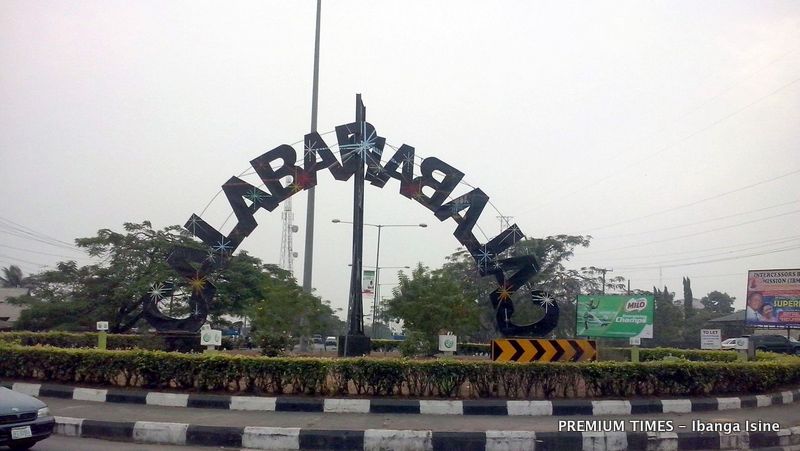 By Ibanga Isine. When Nduma Wilson flagged a cab on December 11, 2015, she had only one thing in mind: how to get to the Federal Psychiatric Hospital, Calabar, where she worked.

However, things would not go as planned. As soon as she paid the driver and alighted from the vehicle opposite the hospital gate, she recalled, two teenagers accosted her.

“Before I knew what was happening, one of the boys kicked me on the ankle and I lost balance and fell to the ground,” she told PREMIUM TIMES, describing the boys as aged between 12 and 15 years old.

“As I landed on the ground, the other boy snatched my bag and ordered me to surrender my mobile phone. And I did. I lay on the ground helplessly and shouted for help but none of those who were passing by came to my rescue.”

It was after the marauding boys went away with her valuables that a man walked up and told her to thank God she was not raped or injured.

“I wanted to report the incident to the police but the man who witnessed it all told me I would be wasting my time because the police won’t do anything to the boys,” she said.

The boys who attacked Mrs. Wilson are popularly called “Skolombo Boys”, a name residents of the Nigerian city claim was derived from a Jamaican slang, “Skolo,” meaning, “to obtain.”

While Mrs. Wilson was lucky to get away alive, losing her phone, money, jewellery and getting a slight cut on her finger, a pregnant mother, Emilia Etim, died after her ordeal.

A witness, Usoro Akpanika, told PREMIUM TIMES Mrs. Etim had, at about 7 p.m. on a day in March 2015, gone to buy foodstuff at a shop near her home when members of the dreaded gang apprehended her.

“We were around on the day the boys stormed our area and met Nne on her way to buy foodstuff to prepare the evening meal,” Mr. Akpanika recounted.

“Numbering about eight, the boys surrounded her and demanded she surrender her money and phone but she resisted.

“Before one could count three, a member of the gang, who looked not older than 10, pulled a knife and stabbed the woman on the chest.”

Apparently overwhelmed by the fatal cut, Mr. Akpanika said the woman shouted as she collapsed.

It was Nne’s cry that attracted many residents and caused youth in the neighbourhood to confront the gangsters, who seemed to have gone unchallenged before then, while they terrorised the community.

Seven of the gang members reportedly escaped but one was caught, beaten to a pulp and set ablaze by a mob of local youth.

When PREMIUM TIMES visited Nne’s compound, the place was deserted.

Residents and visitors shared bitter stories about the ruthless gang.

A resident of Calabar South, where the street gang is said to have begun, said the name, “Skolombo” was first used after members of the bloody gang, consisting of street boys and girls, numbering over 30, robbed a busy filling station in the area in 2014.

“It was like a thriller movie,” the resident said.

“Over 30 street boys and girls swooped on the filling station in a commando style, shot sporadically into the air and within minutes, collected all the sales proceeds from the cashiers.”

After successfully robbing the station, the source said the leader of the gang, whose face was masked, fired into the air and shouted, “Skolombo” and the gang members responded, “obtain by force,” and they disappeared just as they came.

The changing face of Calabar

Calabar is first in many historical narratives in Nigeria. It was the first seat of Government of the Niger Coast Protectorate, Southern Protectorate, and Oil River Protectorate.

It also boasts the first public hospital in Nigeria, St. Margaret Hospital; the oldest Post Office; and the first secondary school in the former Eastern region, the Hope Waddell Training Institute, established in 1895 and where Nigeria’s first President, Nnamdi Azikiwe, had formal education.

Besides its rich history, the annual Calabar Festival and the warm and friendly nature of its people have attracted tourists from all parts of the world to savour its serene beaches and hills, its mouth-watering cuisines and its breathtaking dances and masquerades.

But in the last two years, Calabar seems to be losing its endearing peace and ambience; especially with the menace of street children.

One of such street children is Abigail Orok, an 18-year-old who has spent seven years of her life on the streets of Calabar.

Miss Orok said she was born into a middle-class family in Calabar. Her father had substantial income and was able to provide for everyone in her family and even the extended family.

However, trouble started when her parents separated and her father remarried.

“I had a little misunderstanding at home and my dad’s wife chased me out of the house. None of my relations allowed me into their homes and so I found myself on the street,” she told PREMIUM TIMES.

On her first night outside, she said she met no fewer than 30 other children consisting of boys and girls who had been living on the streets.

By the time she spent a year on the streets, Miss Orok said she had encountered hundreds of kids who lived in motor parks, marketplaces, uncompleted buildings, and unoccupied public buildings.

She maintained that one interesting attribute of street children is a sense of communality which enables them to fight and defend one another from intruders and other hostile street kids.

But that did not insulate them from disagreement and fights which she said were regular within their community.

“We had no food and shelter. To keep ourselves from cold, we slept in uncompleted buildings and market stalls in the night and very early in the morning we go round begging for money,” Miss Abigail said.

“When some of the spiritual churches preached that people should not give money because we’re witches and wizards, we started searching for discarded plastic materials and sold them to make money. Some of us washed plates for food sellers in Bogobiri Street and they gave us remnants of food eaten by customers.”

Miss Orok gave a chilling account of how she and other female street children were constantly raped by men in the night.

“I went through a lot on the streets of Calabar. It is very difficult for me to say everything that happened but the truth is I got raped five times. During the first time, I was sleeping in an uncompleted building with two other girls in the night when a man came and threatened to kill us if we don’t allow him have his way.

“We were afraid he could hurt us and so we allowed him take turns and raped us as much as he wanted and then left us before sunrise. We fled that area because we believed the man had been monitoring us for some time before he came to rape us.

Another former street girl, who gave her name simply as Mary, said on several occasions, their male counterparts turned on female members of the community in the night, raping and assaulting them.

“It was a common thing for the boys to wake up in the night and forcefully have sex with us. They beat up any girl who resisted their advance and so at a point, we had no choice but oblige them anytime they want to have us,” she said.

Asked why they still bonded with people who raped and assaulted them, she said it was better to cohabit with the street boys than go back to face the stigma from members of their families who branded them witches and maltreated and chased them into the streets.

Another street boy, Essien Aye, said he was forced out of home by his stepmother when he lost N3,000 being the proceeds of an entire day of hawking foodstuff on the streets.

He said some street kids who are expert pickpockets might have stolen the money.

“When I got back to tell my stepmother, she insisted I must produce the money or leave the house. I pleaded that I did not steal or use the money but she would hear none of that,” Mr. Aye told PREMIUM TIMES.

“I thought my father would prevail on her to let me in but that was not to be. When he came back and my stepmother told him I lost the money and that I should leave home, he supported the wife and asked that I either produce the money or leave the house.”

He left home and joined hundreds of Calabar street children.

A child rights activist and member of a Calabar-based group, Child Protection Network, Arikpo Williams, said as far back as 2003, it was common to find large number of children living on the streets of Calabar.

“As at 2003 when I discovered we had uncomfortable number of children on our streets and tried to do something about it, I met some children who told me they had been on the streets for over seven years,” Mr. Arikpo told this newspaper.

“If somebody says he has been on the streets for seven years at that time, it means he had lived outside home as far back as 1997. It was unfortunate we had such an ugly situation and we didn’t even realise it. So it is an old problem.”

Before 2013, Mr. Arikpo said, hardly was any of the children involved or arrested by the police for committing crime.

He said the Skolombo menace started when members of adult gangs in Calabar South Local Government Area lured street children into the underworld and later used them as tools for wielding economic and political influence.

“It pains me that I have to keep repeating this and people are not getting it. What has come to be known as “Skolombo Boys” is a cult formed by ‘Area Boys,” Mr. Arikpo told this newspaper.

The first known children’s cult emerged in 2013 and started spreading during the build-up to the 2015 general elections.

The situation further degenerated during the build-up to the 2015 general elections when adult leaders of the street gangs increasingly pushed more children to stoke conflict thereby forcing politicians to recognise and settle them with huge amounts of money.

With so much to gain from the ugly trend, what started as Skolombo Boys later multiplied into several smaller cult gangs including Blackskin, Skylo, among others, PREMIUM TIMES learnt.

In his reaction, the Security Adviser to the Cross River State Governor, Jude Ngaji, said criminal elements in Calabar recruited and used street children to perpetrate crimes including rape, armed robbery and killings.

To underscore the seriousness of the problem, he said the state Governor, Ben Ayade, commissioned a security outfit christened, “Operation Skolombo” to deal with crimes associated with deadly gangs, which had multiplied and were operating in many parts of the city.

While the activities of the streets gangs have largely been curtailed with the massive arrest and prosecution of some of the adult perpetrators, he admitted that some of the street kids still lurk around parts of the city.

The Cross River State Commissioner of Police, Henry Fadairo, also told PREMIUM TIMES that the command was collaborating with other security agencies in the state to address the menace of the street gangs.

Mr. Fadairo said the Skolombo Boys started from Calabar South Local Government Area before it spread to many parts of the capital city.

This is the first of a two part report. The investigation was done with the support ofFord Foundation and the International Centre for Investigative Reporting.