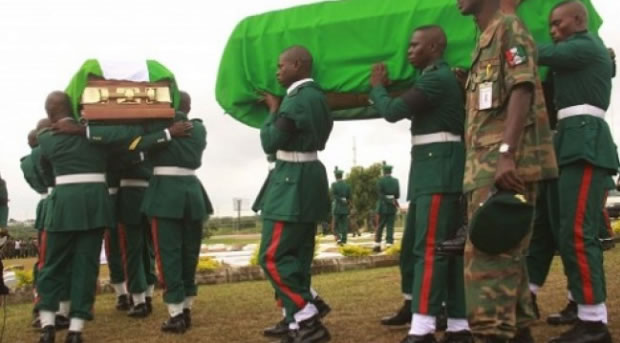 Themed Forgotten Soldiers, this work is the result of three months of planning, reporting, researching, undercover investigation and dozens of interviews by ‘Fisayo Soyombo, editor of TheCable, who, you may recall, also went undercover in December 2015 to expose sickening levels of corruption and stench at the Apapa, Lagos, premises of the Nigerian Ports Authority.

Produced with support from the International Centre for Investigative Reporting (ICIR),Forgotten Soldiers is a moving, hard-won exploration of what it means for a soldier to suffer life-threatening injuries while defending his country’s territorial and existential integrity, and then watch helplessly as he is ignored and forgotten by the army, government and people he defended.

Today, you will meet Johnson Nwibani, a one-legged soldier who exemplifies the army’s unconcern for the welfare for its workforce. As you must suspect, Nwibani wasn’t born one-legged. He was shot by Boko Haram in 2012; and after watching maggots infest his leg due to poor medical care, he had to endure the indignity of having it amputated. All he has asked for ever since is a prosthesis.

After three years of waiting and a series of phantom medical trips abroad, he finally got a “fake” prosthesis that bruised his wounds each time he wore it. No one has listened to his complaints that this prosthesis is impossible to wear. Meanwhile, his crutches are hurting his ribs, too, owing to overuse.

In all, a man who almost gave his life for his country can’t seem to get an artificial leg to carry on with his life. “Should I be in this condition for four years?” he wonders. “Would this happen to me if I were their son or if my wife were their daughter?”

On other days, in the next four days, you will meet more soldiers with equally touching stories, including their wives — the unsung women who are lightening the weight of their pains. And, of course, you will hear the official reaction of the army to the interesting but heartbreaking revelations uncovered by this project.

There are videos recorded undercover as proof of what is going down at hospitals for injured soldiers, but TheCable has decided against publishing them (although stills from them will accompany some of the stories); these videos were edited by Temiloluwa Bamgbose.

There are also lengthy audio recordings, parts of which have been infused into some of the series, particularly in cases of grave revelations. These audios were processed by Bamgbose, while the soldiers’ voices were modulated by Tony Akpata. Finally, the texts were edited by ‘Sola Fagorusi.