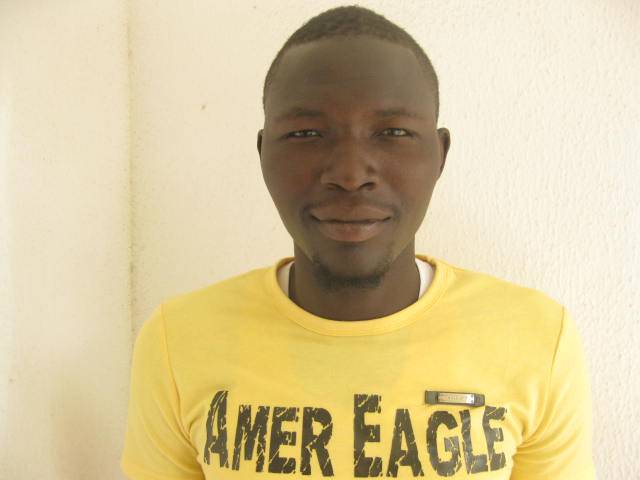 By Samuel Malik in Maiduguri

Ayuba Ijai counts himself lucky to be alive. Twice, he has literally been on “a journey of no return” but he survived on both occasions. The 30-year-old man has suffered the double jeopardy of being abducted by Boko Haram insurgents and, upon escaping, being arrested by the military on suspicion of being a member of the dreaded sect.

He was captured after an attack on his village, Mildu, in Madagali local government area of Adamawa State, by Boko Haram in December 2014 and forcefully taken to an unknown place. There, he was given two options – conversion to Islam or die. The poor young man chose to live.

After about three months of being held hostage alongside 29 others, including four women and two little children, he was able to escape by riding his luck.

Ayuba’s parents had told this website in an earlier report that their son escaped when government troops liberated Madagali but Ayuba said that was not the case, as he and others escaped by taking their chances when they noticed one Saturday night that the insurgents were not around.

“There was no light, save for moonlight and when the women came out, they saw that there was nobody. So, we all decided to take our chances and escape,” he explained, adding that he and a few went in one direction and others went in different directions.

His freedom was, however, cut short when he was arrested by members of a youth vigilante group, Civilian JTF, and handed over to soldiers less than three hours after he arrived home in early March 2015. He was accused of being a member of the insurgency group from which he had just escaped. He and his family could not believe it but, again, for the second time in three months, he was forcefully taken from his home and loved ones.

In December, 2015, two months after the icirnigeria.org’s report, Insurgency: Nigerian Army Detains Scores Of Youths Without Trial, exposing how the Nigerian military had continued to illegally detain Ayuba and other innocent youths accused of being Boko Haram members, the Nigerian Army released him after nine months in detention.

According to Ayuba, he was transferred from Giwa detention facility to Maimalari Barracks, the headquarters of 7 Division Nigerian Army, in October before his eventual release on December 9.

From eating leaves to defecating in a bucket

Ayuba’s mother, Hauwa, had in the earlier report explained that when their village was attacked by Boko Haram members, she left her son behind because he was sick and too weak to escape. She thought he would be killed by the insurgents.

“He was so sick that he could not walk,” she said.

Ayuba said the Boko Haram members came into the family home and met him lying down, as he was too weak to get up.

“They met me inside the house and took me with the other people they captured,” he recalled, adding that they were herded into a room in an abandoned house in one of the nearby villages.

They were left without food and water.

“Not for once did they give us food or water and we dared not ask,” he said. “In the room, there was little water and grinded corn abandoned by the owners of the house. We ate it raw and washed it down with the water.”

The hostages were fortunate that they were not tied and the women – two elderly ones, one pregnant and the mother of the two children – and children were allowed to go outside once in a while. Thus, anytime they went out, the women would find fresh corn, groundnut or water and bring to the others, who ate everything raw.

“Sometimes the children would go out to play in the farms around the house and they would come back with fresh beans with the leaves and we would eat it too. We ate anything we could find just to stay alive.”

According to Ayuba, they were so thirsty one day that one of the hostages had to drink his urine, as there was no way they could get water.

Toilet was not provided despite the fact that the men were not allowed outside. An elderly man, Ayuba said, tried to go out once and was severely beaten, so others made up their minds to remain inside.

They found a bucket inside the room which they used as a makeshift toilet. Everyone defecated inside that bucket and when it got filled, they switched to using nylon bags or rags, which were mostly brought to them by the women, and when they were done they tossed the faeces out.

With everyone focused on survival, nobody cared about the stench. Not that they had any choice anyway, and for the entire time they were held hostage, nobody took a bath.

According to Ayuba, they owed their survival to the four women because most of the hostages, including him, would have died of starvation.

“Imagine being kept in a room for about three months without food and water. Those women practically saved us,” he said, adding that it was a miracle that no one fell ill.

The insurgents, he added, only spoke Kanuri, which meant the detainees could not understand what they were saying, and they did not have their families with them.

Normally, Ayuba said, the insurgents would leave someone behind as guard when they were away but one night they discovered that no one was left back.

Either way, the abductees decided to take a risk and escape after they had asked the women to check and were told there was nobody around.

With no knowledge of where they were headed, they just wanted to go as far as possible and hoped that luck would smile on them.

When it was daybreak, Ayuba and a few of the others hid in the bush and on trees and waited for darkness to avoid walking into the hands of the insurgents. When night came, they continued and by the next daybreak they were in Askira Uba in Borno State.

“We came into a potatoes farm and were so hungry that we dug up some to eat, after which we walked for some minutes before coming to a main road.”

They saw a truck driver going to Maiduguri and begged to hitch a ride after explaining their ordeal. The kind driver asked them to get in and when they got to Maiduguri he gave Ayuba N200 with which he paid his transport fare home.

The arrest and detention by the military

Less than three hours after getting home and before he could even see his parents who were away, some members of youth vigilante group, Civilian JTF, in the area got news of his arrival and he was arrested and handed over to soldiers as a Boko Haram member.

“Before then, news had spread that I had been forced to join Boko Haram because nobody heard that I was killed. Then, when people were taken by the insurgents, especially men, and nothing was heard about them for some time, the assumption was that they had been conscripted by the insurgents because that was how they recruited members. So, some people thought I had become a member of the group,” he explained.

He was taken to Giwa barracks and what he thought was going to last only a few days turned out to be several months’ detention.

“Having explained myself and what happened to the soldiers, I thought they were going to release me soon but I ended up been detained for nine months,” he said.

Despite being held longer by the military, Ayuba said the experience was far better than what he experienced with Boko Haram.

“We were given three-square meals a day, blankets, mattresses, detergents. We also had bathrooms and toilets,” he noted, adding that any sick inmate was taken to a clinic within the barracks.

More importantly, Ayuba said they were not tortured but was also quick to add that they were separated from Boko Haram members arrested by troops.

“I don’t know what happened there because we were separated from them. Those the military felt were innocent were detained in Cells 1 and 5 close to the entrance to the barracks while those they felt were real Boko Haram members were kept in Cells 3 and 4, which were not close to where we were kept,” he explained.

He said he and other innocent youths were kept in Cell 5 while the elderly ones were kept in Cell 1. He added that most of the inmates in Cells 3 and 4 were brought in the night and that he sometimes heard some shouting and screaming coming from the direction of the cells but did not know if the detainees there were tortured.

For nine months, the military denied him access to his family and loved ones. Not even phone calls were allowed.

At Giwa barracks, 100 of them were kept in a big room and they were brought out every morning to sweep and keep their surroundings clean.

In October, 2015, they were transferred to Maimalari Barracks, 7 Division Nigerian Army in Maiduguri, preparatory to their final release.

Following his transfer to Maimalari, Ayuba said he and other detainees were given N10, 000 each and told that the Borno State government was going to help them acquire some skills before being reintegrated into the society.

According to him, 50 of them were kept in one room while 120 were kept in another. They also all had small mattresses which were laid on mats on the floor.

They were promised jobs by the state government, which, Ayuba said, promised to help with their rehabilitation back into the society.

However, after some lectures by both government and military officials, nothing was forthcoming from the promised skilled acquisition and employment and after two months, they were asked to pack their belongings and go home.

“They just told us to pack our things and go,” he said.

According to Amnesty International, being held for that long without being charged to court, as well as being denied access to family members amounted to a violation of Ayuba’s human rights.

A researcher with Amnesty International, Daniel Eyre, who spoke to our reporter in December, 2015 said that Ayuba’s arrest, detention and treatment by the Army is consistent with a pattern of human right abuses by the Nigerian military.

“From what you told me about his case, he appears to have been detained for about 10 months without being brought to court or charged with a recognisable criminal offence. This amounts to unlawful detention and is consistent with the pattern of unlawful detention by the Nigerian military that we have documented in the past,” he said.

He said that Amnesty International “has documented the deaths of over 7,000 people in military detention between 2011 and 2015 as a result of starvation, insanitary conditions, torture and other ill treatment, and lack of access to medical assistance,” adding that the organisation “had repeatedly called for these deaths to be investigated and for the military to allow independent monitors access to detention facilities.”

As for Ayuba, he is not bothered about any human right abuse he might have suffered. He is just lucky to be alive and back home. But, for the uneducated young man, life is hard and he ekes out a living by doing odd jobs