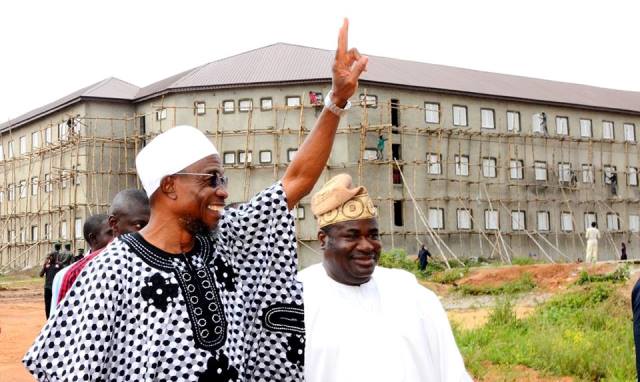 By Ajibola Amzat, The Guardian Newspaper

The Governor of Osun State, Ogbeni Rauf Aregbesola did not give a true picture of the state’s revenue profile when he told  the House of Assembly that the total revenue allocation to his state between November 2010, when he was first sworn-in and December 2014.

While addressing the sixth Assembly during its inauguration on June 2, the governor said the total revenue allocation from the federation account to the state since November 2010 to December 2014 is N176.5 billion.

This figure, according to the governor, comprises the net statutory allocation and other accruals such as exchange gains, additional fund from NNPC and gross VAT allocation.

But as The Guardian’s investigation reveals, this statement is incorrect.

According to the records published by the Federal Ministry of Finance, the Osun State government has actually received a total of N180.3 billion within that period, therefore showing a difference of N3.8 billion.

The disparity represents about 10 percent of the bailout the state received recently from Central bank of Nigeria (CBN). The amount also covers more than a month’s salary of the entire workforce of the state.

The governor said further in his speech to the Assembly that, if Internally Generated Revenue (IGR) is added to the total allocation of N176.5 billion, the state was able to generate N204 billion.

This addition presumes that the state was only able to internally generate N27.5 billion between November 2010 and December 2014.

Again, this figure is suspect considering the government’s claim in 2013 that it collects N1.6 billion as IGR per month.

Speaking in Lagos at Nigerian Telecoms Development Lecture (NITDEL) in September 2013, Governor Aregbesola said the use of Information and Communications Technology in all government transactions has helped increase his state’s IGR to N1.6 billion monthly.

That is a huge difference compared to N300m monthly IGR, which the previous administration had been recording, he said. This performance was listed as part of Governor Aregbesola’s achievements during the last election campaign.

If this claim were true, the IGR for the state in 2013 and 2014 alone should be hovering around N30 billion or more.

Therefore, it is either the governor lied to the public about generating N1.6 billon monthly as internal revenue since 2013 or a substantial part of the revenue is left unaccounted for.

Even then, the records of the National Bureau of Statistics, (NBS), Joint Tax Board and State Boards of Internal Revenue show that the IGR for Osun state between 2011 and 2014 are N7.39 billion, N5 billion, N7.28 billion and N8.51 billion, respectively, totaling N28.2 billion. Added to the total of N600 million made between November and December 2010, the state’s IGR rises to N28.8 billion.

Even if this figure were to be considered the actual total of the state IGR during the entire Aregbesola’s administration, still it shows that N1.3 billion of the state IGR is left unaccounted for.

In total, the governor has failed to account for N5 billion in his presentation to the state Assembly. That amount could have paid for two of the seven months’ salary the government was owing workers before it secured the bailout fund.

Interestingly, the House did not detect the difference. If they did, no one raised any dust.

Other Revenues ignored in the governor’s report

These accruals added to the allocation and IGR raise the entire revenue for the state far above N273 billion.

Again, this addition was not included in the talking points of the governor.

Further still, the record of the Federal Ministry of Finance also revealed that the state government received a total of N194 billion on behalf of the 30 local government councils since Governor Aregbesola assumed office in November 2010.

It is on record that the local government councils in most states in Nigeria are not administered by elected officials but handpicked by governors.  Hence state governments receive and administer allocations of the local councils.

This addition puts the total revenue in the control of Osun State government at N467 billion within the period under review.

But the governor was also silent on these earnings while giving account of his stewardship to the representatives of the people Of Osun state, and the latter let it slip.

Meanwhile, an interest group in the state, Osun Stakeholders (OS), said the governor’s oversight is deliberate.

According to the group, Aregbesola always has been economical with the true concerning the state of the account because of his “financial recklessness, corruption, money laundering and fraudulent application of Osun States resources”.

With the volumes of revenue receipts during his tenure, the group believes that the government should not have had any problem paying workers’ salaries.

According to them, the governor who at a point owed workers’ salaries for more than seven month draws about N502 million security vote monthly from the state coffers.

In a petition dated August 10, 2015 to Economic and Financial Crimes Commission (EFCC), a copy of which was made available to The Guardian, the group said the non-payment of workers salaries lasting for more than seven month is a “consequence of the corruption, fraud, hypocrisy, financial recklessness and impunity that has become synonymous with the administration of Ogbeni Aregbes ola”.

The stakeholders stated that though the debt profile of the state, which includes both external and domestic debts, now stand at N400 billion, most of the projects for which the loans were collected were never executed.

Examples of such projects listed include the road construction from Osogbo to Ila –Odo for which a sum N17.5 billion was borrowed from the Bank of Infrastructure; a market project at Dagbolu, a suburb of Osogbo, for which N6 billion has been expended and the proposed MKO Abiola airport at Ido-Osun, and rehabilitation of Gbongon Sekona Akoda road.

The Guardian visited the locations of these projects and found out that major works are yet to begin two years after the loans were secured.

At the proposed airport, there is some work going on but the critics of the government say that there is still not much to show for the amount of money so far pumped into the project and that it might end up a white elephant.

Two years after, the dream is yet to fly.

The proposed Osogbo-Dagbolu international market is still a deep forest. “We heard about it, but we don’t know when it will commence,” a native of the town told The Guardian.

Roads construction and rehabilitation projects within the states such as 29 km Gbongon Sekona Akoda road, 48.60 km Gbongon-Odeyinka –Orilelowo-Araromi Owu road and 16.35km Ikirun junction –IlaOdo –Kwara state road remain deserted at the time of The Guardian’s visit. The popular Osogbo-Iwo road is also undone as at the time of visit.

For these projects, the government Osun State sought $692.3million from Finance Group from Cyprus according to a  “Letter of Request for Loan” dated June 7, 2013 which The Guardian obtained.

Other loans collected by the state government according to the petition submitted to EFCC are: $65 million borrowed from Islamic Development Bank for water supply and sanitation project and N11.5 billion Bond (Sukuk) for the construction of 23 high schools at N450 million each and several others. The indebtedness to commercial banks by Osun State stands N150 billion, the group added.

Meanwhile, the debt profile of the state, according to the Debt Management Office (DMO) stands at N74 million for external debt and N41.4 billion for domestic debt, totaling 41.78 billion. This is far below the amount claim by the petitioning group.

But the OS insists that the debt profile is a lot higher.   They argued that DMO record did not capture several loans granted to the state by several commercial banks such as N562 billion collected on 25 May 2012 from First Bank to fund the “o” Uniform programme; and another N3 billion taken on 25 June 2012 for supplying motor vehicles.

The Guardian was unable to verify these claims from the mentioned banks before publication because of the reluctance of the bank officials to divulge information of their client.

One of the members of OS and a former Head of Service under Governor Aregbe’s administration, Elder Segun Akinwusi said the governor told half-truths when explaining the rational of N11.5 Sukuk bond to the people of the state. The governor said the loan obtained at 14.5 percent compound interest was interest-free, but this is not so, he said.

He said paying N25 billion over N11.5 billion loan, no matter how long, is not a reflection of sound economic judgement.

Also, an Osogbo-based NGO, Civil Societies Coalition for Emancipation of Osun state has noted that the gross mismanagement of the state’s resources by the present administration has left education, health and commercial sector of the state comatose.

However, the Director, Bureau of Communications and strategy, Osun state, Semiu Okanlawon, has dismissed the claims as unfounded.

In a telephone conversation with The Guardian, Okanlawon said they have been advised to disregard the allegation by the stakeholders because “the people behind this campaign are politicians who failed in the last election.”

The Guardian further asked Okanlawan to respond to specific questions around the revenue, expenditure and debt profile and to the specific allegation of profligacy by the petitioners, but he said he would need to get approval from the governor before he could respond. And that was the last word from him. He neither picked his call again, nor responded to messages sent to him on phones or Facebook.

Notwithstanding that, in the previous press interview he granted, Okanlawon had said the people complaining about the spending of the government should “produce evidence other than merely mouthing it.”

On the N11.5 bn loan borrowed from the Islamic Bank, Okanlawon insists the loan is interest free.

Islamic Development Bank on its website explains Sukuk as Islamic equivalent of bonds.

However, as opposed to conventional bonds, which merely confer ownership of a debt, Sukuk grants the investor a share of an asset, along with the commensurate cash flows and risk. As such, Sukuk securities adhere to Islamic laws sometimes referred to as Shari’ah principles, which prohibit the charging or payment of interest.

In layman language, the cost for this kind loan is not interest; even then, the issuer still benefits from giving out the loan by sharing from the returns generated by the asset.

Osun state has recently obtained another N34.9 billion through the recent bailout by CBN. With this intervention, the government has been able to pay some of the backlog of owed salaries.

The Osun stakeholders are not excited about the collection of the bailout loan to pay salaries.

“This loan and several other loans collected previously will put heavier burden on our children in the future, that is why we are calling attention to what is going in our state,” said Elder Akinwusi.

The reaction from the government of Osun State is that this agitation by “a section” of the people is part of the preliminary struggle for 2018 governorship election.