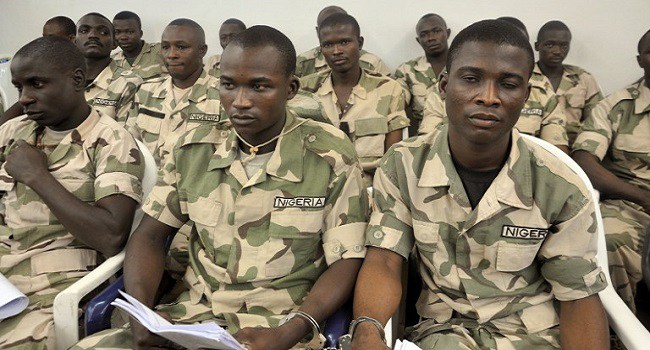 The icirnigeria.org has learnt that the Nigerian Army arrested eight soldiers suspected of giving information to the media about the refusal of soldiers to be deployed to the North east.

The soldiers, who were arrested on January 9, were released today after more than two weeks in detention.

Vanguard newspaper reported on January 8, 2016 that more than 3,000 soldiers, who were dismissed for various offences but were recently pardoned, had protested their deployment back to the warfront.

The army denied that it deployed the soldiers to the North east and warned that it would no longer tolerate the negative attitude displayed by the soldiers.

READ THIS ALSO:  Al-Makura Raises Alarm Over Influx Of Criminals Into Nasarawa State

“The Nigerian Army thrives on discipline, loyalty and good conduct and if anyone of them cannot measure up to expectation or live by those tenets, such a person is free to leave the army,” army spokesperson, Sani Usman, a Colonel, said.

Despite the denial, this website reliably gathered that a day after the story broke, army authorities dispatched a very senior officer, a Major General, to the Command and Staff College, Jaji, Kaduna state, who ordered the arrest and detention of the eight suspects in Military Police guardroom following their interrogation.

Our reporter was not able to determine how the authorities determined that just the eight that were arrested were culpable.

The following day, according to a defence source, who cannot be named, they were transported to the Abuja where they were further questioned for their role in getting the information to the media. It was also learnt that the Provost Marshal is billed to address all the pardoned soldiers in Jaji later today.

It was equally gathered that 350 out of the over 3,000 soldiers from the group were last Saturday deployed to the North east. Out of this number, 200 were deployed in Yobe State while the remaining 150 went to Buratai, hometown of Chief of Army Staff, Tukur Buratai, following an attack last week by Boko Haram insurgents.

As is usual with him in dealing with journalists seeking information, Usman did not reply to a text message sent to him or answer calls to his mobile phone as at the time of filing this report.

During former President Goodluck Jonathan’s administration, the military came under serious attacks at different times, which led to several soldiers running for dear life following the overrunning of their locations by Boko Haram insurgents.

Soldiers stationed at Baga, Monguno, Gwoza, Damboa, Gamboru Ngala, Banki, etc. all in Borno State and Mubi in Adamawa State had to abandon their posts due to the superior firepower of the insurgents.

In May 2014, the General Officer Commanding, GOC, 7 Division, Nigerian Army, Ahmadu Mohammed, a Major General, was shot at by angry soldiers who blamed him for leading them into an ambush that led to the death of their colleagues. Three months later, over 400 soldiers at Gamboru Ngala and Banki, which border Cameroon, fled into the West African country after they were overpowered by the insurgents, an action military hierarchy said was a tactical manoeuvring.

In October of that year, the insurgents in a daring move, invaded and captured Mubi, the hometown of former Chief of Defence Staff, Alex Badeh, a retired Air Chief Marshal, and renamed it Madinatul Islam, the City of Islam.

These and other incidents greatly embarrassed the military and led to the court-martialling of hundreds of soldiers from different units across the country.

They were charged with offences ranging from conspiracy, attempted murder to disobedience to particular orders, leading to the dismissal of some while others were sentenced to death by firing squad.

However, following the election of President Muhammadu Buhari, there were pleas for a review of the soldiers’ cases, as many of them claimed they were not given fair trials.

In August 2015, after the review of the cases, over 3000 pardoned soldiers were asked to report to Jaji for screening and retraining. Also, in December, the military authorities commuted the death sentences of 66 soldiers to life imprisonment.

The latest incident followed the deployment of some of the soldiers to the North east, which they protested. However, the soldiers have apparently given in now as 350 of them were deployed to the battlefront over the weekend