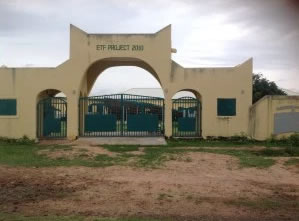 -‘Blame State Governors, not us’-UBEC
In continuation of LEADERSHIP Weekend’s special report on the state of Almajiri schools in some northern states four years after it took off. AGBO-PAUL AUGUSTINE (Abuja) reports on the final and concluding part of the story.

The programme in Borno State is plagued with several problems most of which is related to continuing activities of Boko Haram terrorists that has ravage the state forcing many people to flee from their homes for safety.

An official of the Borno SUBEB who does not want his name mentioned said “nothing appreciable has been achieved in the Almajiri School Project‎”.

One of the biggest challenges, apart from inadequate funding from the federal government to complete the structural needs for the project, is lack of support from the state government in terms of fulfilling its counterpart commitment in some of the completed schools.

At the Borno State ministry of education, an official told LEADERSHIP Weekend that the state government is overwhelmed by the level of destruction by the Boko Haram insurgents and hence has decided to prioritise its commitment to reconstruction of destroyed infrastructures and returning of IDPs to their original communities.

“State has not forgotten the Almajris in the state but as you know, we have a much bigger problem of resettling our people and rebuilding our towns and that is Billions of naira we are talking about,” he said.

This appears to be the bottleneck of the Almajiri Schools in the state as the government is faced with how to reconstruct communities destroyed by terrorists in the state. Many Almajiris and their tutors are said to have fled to the safer Internally Displaced Camps, (IDCs) in the state capital.

Despite the security situation in the state, some of the few completed schools are running skeletal services.
A former desk officer, Malam Algoni, who is now retired, informed LEADERSHIP Weekend that when the project was to kick off it was designed out of the realities of circumstance to be implemented in the models.

Algoni further said there are only two Model II Almajiri Projects in Borno state “which are located in Mashimari Street of Maiduguri‎ ‎and Magumeri-Gubio road, the later yet to be opened for the Almajris.

The Model I Almajiri School was designed to be located at Ashiwur area of Damasak in Mobbar LGA, which was affected by insurgency. Other Model I projects are located in Damboa (Shuwari Tsangaya), Bama, Kukawa and Bayo local government areas where lands were allocated for the schools but funds were not deployed to carry them out even before the Boko Haram insurgency came to sack some of the areas.

The Model I Almajiri School in Nganzai has been abandoned since its inception in 2011.

The Model III benefitting schools of the Almajiri School comprises of Baba Buji Islamiya, Alburhan located in Damboa Road, Baraimjul Iman located along Circular Road, Maiduguri, and Almunir School Located in Damboa-Sheraton.
All the Model III Schools are conventional private Nursery and Primary schools that were given some kind of interventions because of their Quranic backgrounds.
Algoni explained that the funds given to the intervention schools were just to assist them to continue to improve their curricula, and not grants that would be recurring.
According to the Director of ‘Tsangatul Goni Idris Ali Tahfiz Alquranil Kareem’, a traditional Quranic memorisation school, Goni-Idris Goni Usman, the federal government took over the school in 2012 by building the new school in their own premises.

“The federal government built the school about a year ago, but the state is yet to commence payment of our staff salaries, feeding of school children as promised”, said Goni Usman. Usman said his school has beddings through UBEC but has no uniforms.

The difficulties faced by the schools, according to Usman, has forced some of them to tasking the parents of the children to pay the sum of N2, 000 each to foot the bills of the teachers and the meals of the pupils.

“We have also had meeting with the parents recently that since the federal and the state governments are not forthcoming we have decided to commence the boarding session for the 50 pupils who would be paying N3, 000 each,” he added.

When LEADERSHIP Weekend was conducted round the school by the director, it was observed that the completed school building has no kitchen, store, clinic, and electricity.
The school has 750 pupils, comprising of 500 males and 250 females, most of who attend the school from their homes, while others that are supposed to be accommodated in the hostels still pass their night under corrugated roofing in an open compound that also serves as classes for the day pupils.

Some stakeholders in their views see the programme as a failure in Borno State because the idea was conceived on a wrong footing in the first place.

In their explanations, given the condition and atmosphere in which the project was designed to operate, “it will only give room for corruption and distrust between the government officials and those it was targeted to benefit”.

Adamawa: Only 480 pupils plugged from the streets
Federal government Almajiri schools in Adamawa State are located in Mubi North, Song, Yola North, Yola South, Michika and Balwa LGAs and are mainly the Model I and II with a total number of six schools.

The six Almajiri schools in the state have enrolled a total number of 480 pupils in their maiden admission with an average of about 40 pupils in a class.

Findings by LEADERSHIP Weekend in the Adamawa Almajiri school system indicate the programme often suffers setback as tutors are in the habit of withdrawing the pupils from the school during the farming season to the farms and this has adversely affected the programme in the state.

In Yola South, the Almajiri school located was empty when LEADERSHIP Weekend visited the site as no one was seen in the school.

Some residents told LEADERSHIP Weekend that the school has remained closed for a long time even as they appeared ready for academic activities.

All Almajiri schools in Adamawa state have been completed but LEADERSHIP Weekend couldn’t find pupils in the schools as they remained locked.

According to the director, quality assurance in the State Universal Basic Education Board, Alhaji Saidu Komsiri, of the six Almajiri Schools in the state, two were built by the defunct Petroleum Trust Fund (PTF) while the rest were built by UBEC.

The director, however, said that the major challenge facing Adamawa Almajiri Schools is that most of the Almajiri’s are not indigenes of the state but were brought over to the state by indigenes of other states who are usually seasonal migrants.

LEADERSHIP Weekend learnt that as the farming season set in, most of the schools will be empty. The situation is not different during harvesting time in the state.
Each of the Almajiri Schools in Adamawa State cost the federal government not less than N63 Million each to construct according to the records of UBEC for schools procurement for 2014.

UBEC blames state government
Reacting to enquiries by LEADERSHIP Weekend on the state of Almajiri schools system in the country, UBEC, through its director, planning research and statistics, Bello Kagara, did not give any clear figure of how much the commission has expended on the programme.

LEADERSHIP Weekend had through a Freedom of Information (FOI) Act sought from UBEC among others things the total money spent on the Almajiri Schools System in the country, total enrolment, contributions of TETFund, reasons for continued lock of completed schools, rationale behind the location of Almajiri schools on private properties and how much contributions has come from host states.

In a response, UBEC said it has constructed 117 Model Almajiri Schools in 26 States of the federation and the FCT. A breakdown shows that North East has 27, North Central 22, South West 16 while South South has 2 schools.

It stated also that 36 Model Tsangaya Schools were constructed by TETFund and all completed schools have commenced academic activities.

The commission further stated that in an attempt to strengthen existing Islamiyyah and Ma’ahad schools, 138 schools in 30 states and the FCT were identified and provided with funds to expand their infrastructural facilities.

It said that 58 UBEC staff had been trained on Quality control in Almajiri Schools, while 270 Almajiri Model School proprietors and head teachers were trained on curriculum implementation.

On why the Almajiri Schools System is poorly implemented, the commission shifted the blame to the door steps of some state governors.

Although, UBEC in her response to LEADERSHIP Weekend did not mention the states, however, stated that “Lack of political will on the part of some state Governors to adopt and replicate the programme, as stipulated in the signed MoU”.

It went further to say that the inability of some of the schools to commence academic activities is due to lack of financial inputs by some state governments.

It accused some of the state governments of using some of the Model Almajiri Schools for purposes other than Almajiri education.

Others include: “Non-recruitment and deployment of Basic Education teachers into Almajiri schools by some states.
“Non-integration of Alarammas/Malams/Proprietors into the programme…

“Non-inclusion of feeding as a retention strategy by the states and local governments. Only a few states have taken action in this regard”.