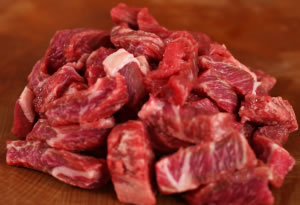 The Federal Ministry of Agriculture and Rural Development (FMARD) say Nigerians consume about 360,000 tonnes of beef yearly. This conservative figure is projected to rise to 1.3 million tonnes per year by 2050, some 260 per cent increase.

In 2008, while he was still a veterinary medicine undergraduate, Okan Hembel bought a cow hump at the local market in Jalingo, Taraba State. He took this priced cut home in the hope of preparing a delicious meat dish for dinner. Instead of ending in the pot, the whole hump was thrown away.

“When I got home, I sliced the meat and I saw a deposit of antibiotics inside,” Hembel recalled. “There is a particular antibiotic drug which veterinary doctors administer to animals. It is whitish in colour. It’s called PenStrep. Either of these two antibiotics was responsible for that deposit.”

Antibiotics are used for controlling the growth and spread of harmful germs, both in humans and animals. They are widely used by poultry farmers to enhance growth rates and boost egg production. While antibiotics are quite beneficial for raising disease-free animals in record time, they can be hazardous when meat from animals that have high levels of antibiotics is consumed.

To prevent this from happening, farmers are mandated by regulators to adhere strictly to the withdrawal period of veterinary drugs before selling their animals. The withdrawal period is the time-frame between the last dose of antibiotics given to animals and the consumption of such animals or food derived from them such as milk or eggs. Hence, the withdrawal period allows the animal’s system to rid itself of the residue of these veterinary drugs.
Although some farmers, especially small-holders do not observe these instructions, this is not the biggest challenge in the use of antibiotics. Whenever farmers misuse antibiotics either by using less than is recommended or more, it can cause germs to develop genes that resist the effect of these drugs. When this happens, the drugs become ineffective at killing germs which, in turn, results in antibiotics resistance in humans.

“It has been discovered that there’s transference of resistant genes from animal to human microbiota,” Adebisi Agboola, an animal scientist at the University of Ibadan says. “Humans are the consumers of these animal products [and] with the residual effects of antibiotics, when people take antibiotics for common infections, it doesn’t work. That becomes a problem and because of that, the European Union (EU) has banned the use of antibiotics as growth promoters in animals since 2006. The health risk of using antibiotics (in animals) is very high.”
Agboola disclosed that while Nigeria is yet to ban the use of antibiotics in animal production, there is a gradual move by professional institutions to induce farmers to embrace alternatives like prebiotics and probiotics. One of such institutions is the Nigerian Institute for Animal Science (NIAS), which is coming up with a range of policies and regulations that will ensure that farmers comply with best practices in animal husbandry. Due to prevailing environmental conditions, such as high humidity and poor sanitation in Nigeria, which predisposes animals to germs, eliminating the use of antibiotics may not be possible.

Besides the indiscriminate use of antibiotics, the rearing, sale and slaughter of cattle are also processes that throw up challenges that could also pose health hazards to people who consume meat products.

In Tambuwal, a local government area in Sokoto  State, Juli Mohammado rears cows for sale across Nigeria. Every Monday, he sells about 150 cows to abattoirs and markets as far as Lagos.

He said the cows sometimes suffer from foot and mouth disease, a viral disease that is common in cattle. To prevent his cows from becoming ill, Mohammado vaccinates them against infectious diseases from time to time.
“I have doctors from the veterinary [clinic] who come to treat the cows when they are sick. Most of the treatments are through injections,” he said.

At the Sokoto Modern Abattoir, the facilities are not necessarily top-tier, but they are a clear improvement upon what is available in Tambuwal. Nevertheless, the conditions are still quite dismal.

Suraju Muritala works as a veterinary inspector at the abattoir. His team of vet doctors check the animals to ensure that zoonotic diseases such as tuberculosis and brucellosis are not allowed to spread. During inspection, the animals are also quarantined for 24 hours before they are slaughtered.

Arike Ajumobi, who runs a small poultry farm in the Elebu area of Ibadan, Oyo State breeds quails, turkeys and chickens. In addition to the regular vaccinations which she gives her birds, she admits that some drugs are also included in the feed to prevent caking and the growth of fungi.

“Some of the antibiotics we used in the past are no longer as effective as they once were,” Ajumobi said, “it seems the chickens have become resistant to the old drugs. We now have to use different types of antibiotics to ensure that they don’t die.”

She said that without antibiotics most of her birds would definitely die of diseases. So how does she strike a balance?

“I always observe the withdrawal period printed on the pack of the antibiotics I use for my chickens. I don’t sell my chickens until they are fit for human consumption,” she noted.

Despite the significance of meat as a source of dietary protein for consumers and a means of income for producers, the supply chain of beef and poultry in Nigeria is still a poorly regulated affair.

FMARD is the principal government body with the responsibility for articulating national policy on animal husbandry. The ministry performs this role through its various departments and agencies. However, the absence of effective coordination between government institutions and key stakeholders has created huge gaps between policy and practice in Nigeria’s meat industry.

First, the ministry does not possess a comprehensive registry for Nigerian farmers, a situation that makes an engagement with farmers difficult because of the paucity of information about who they are, what they do and where they work. The situation implies that the ministry has no meaningful relationship with farmers’ cooperatives and groups such as the Poultry Association of Nigeria and the Miyyeti Allah Cattle Breeders Association of Nigeria, which would have enabled the means for creating a national database for livestock farmers. Such a database would allow the government to monitor and regulate the industry effectively.

Furthermore, there is limited collaboration between professional bodies and institutional regulators to create a benchmark of standards for the meat industry.

Samples of meat collected during the tour of abattoirs in Sokoto and subsequently, in Lagos showed that there are antibiotic residues in the meat, but the residues are quite below WHO recommended levels.

Gentamycin was also detected in the beef and chicken samples (both from Lagos) tested. The average results found the residue of this antibiotic in chicken samples to be 38.37mg/kg while that of the beef samples was 34.51mg/kg.

Hence the concentration of Gentamycin was slightly higher by a value of 3.86mg/kg in chicken than in beef.

Today, Hembel is a practising veterinary doctor with the Ministry of Animal Health and Fisheries in Sokoto State. He wants the government to regulate the sale of veterinary drugs by ensuring that only people with signed prescriptions from a clinic are allowed to buy antibiotics. He is convinced that such a move will prevent a recurrence of his experience with the contaminated hump he bought at the market.

This report was written with support from Ford Foundation and the International Centre for Investigative Reporting.